The new printing press of the Central Bank of Egypt is scheduled to produce plastic bank notes made from Synthetic polymers. The 10 and 20 Egyptian pounds polymer notes will enter general circulation in 2021.

The plastic notes will be printed using state of the art equipment with the highest security feature standards. The new 10- and 20-Pounds plastic money will be circulated along with other denominations.

Polymer banknotes are banknotes made from a synthetic polymer such as biaxially oriented polypropylene (BOPP). Such notes incorporate many security features not available in paper banknotes, including the use of metameric inks. Polymer banknotes last significantly longer than paper notes, causing a decrease in environmental impact and a reduced cost of production and replacement

On the other hand, Central Bank of Egypt has commissioned Giesecke+Devrient with designing and building an integrated plant for the production and processing of banknotes — including cutting-edge IT and security infrastructure, as well as the setup of further regional centers. The goal: to modernize Egypt’s cash cycle from the ground up over the next two years.

The new printing plant and the new cash center are located in the middle of the new capital district known as “Capital Cairo “, 45 kilometers southeast of Cairo. The ambitious urban development project initiated by President Abd al-Fattah el-Sisi will cover a total area of 700 square kilometers and offer space and work for 5 million inhabitants. And a new printing plant with a cash center.

After completion, the plant will do most of the country’s banknote printing and processing, thereby supporting Egypt in its smart automation of the cash cycle and further enhancing banknote security. “Already, our existing security features can be considered some of the safest in the Middle East, but we always have to be a few steps ahead in upgrading our designs and adding new security features, “says Elkholy. “With the G+D-turnkey project, we finally will be ready to fulfill our clean note policy, which we can implement when the integrated plant for the production and processing of bank notes is up and running. “

Egypt and cash: the story behind this duo will be rewritten in the coming years in a country whose capital houses an estimated 28 million inhabitants and where everything flows: The traffic, the people, the money. But when everything flows, then sometimes things get jammed and some hurdles have to be cleared. “Our processes in the cash cycle are just too manual, “says Tarek Elkholy*, former Sub Governor On-Site Banking Supervision Sector & Chief Risk Officer of the Central Bank of Egypt (CBE). “We will ease the processing in the near future. “
Indeed, the Egyptian cash cycle is currently being modernized from the ground up. “In 2020 the CBE will be running a new printing plant and a new cash center, “says Reinhard Hofer, Global Program Manager Managed Services, Currency Management Solutions of Giesecke+Devrient Currency Technology GmbH. Additionally, the already existing four cash centers in the country will be modernized. So, in two years there will be a new print house, a completely new automated cash center, and four that will be newly equipped.

Everything goes? Like clockwork? “Sure, “Hofer says, “we’re on time, still sleeping well, “adding that he occasionally dreams about the project. Which may be due to the fact that he is the general project manager on the German side for one of the largest projects in the company’s 166-year history.

Mutoh to Integrate Global Graphics Software in its Printers 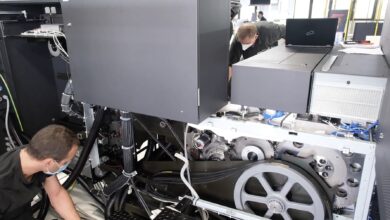