Gravure is the classic printing process for long runs because it guarantees consistency, print quality and colour brilliance like no other process. It is therefore ideally suited for the production of high-circulation magazines and catalogues as well as advertising flyers and supplements of retail chains, for the production of film packaging for food, snacks, confectionery and pharmaceuticals, and also decorative paper for laminate flooring and furniture.

Its enormous range of applications is evident in daily life, in which one continuously encounters gravure printing at the newspaper kiosk, in the supermarket, in the pharmacy, in one’s own kitchen or in the hotel room. In Europe alone, around 1,200 gravure printing machines are operating and over 1.2 million gravure cylinders are produced annually. 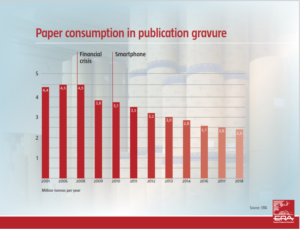 Gravure printing, which was once dominant in the printing of high volume magazines and catalogues, has lost importance due to the structural shifts in the media markets caused by the Internet at the expense of print. Of the almost 5 million tonnes of paper printed annually for magazines and catalogues in Europe in the first decade of the 2000s, only about half remained in 2019.

This is the result of the reduced circulation of magazines and the reduction in the number of pages, mainly because of the decline in advertisements due to the switch of a significant share of the adspend to the digital and online media, and the disappearance of the traditional half-yearly mail order catalogues with up to a thousand pages (“Big Books”). Instead, the mail order houses have increasingly shifted their activities to the Internet and, like Amazon, they are positioning themselves as pure Internet companies. 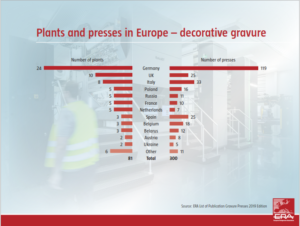 For a long time, the IKEA catalogue was an exception: just a few years ago it still had a worldwide circulation of over 200 million copies and was produced almost entirely in gravure. In the meantime, IKEA has also adapted its marketing to digital media and reduced the circulation of the catalogue in some countries. But it should be noted that this development at the expense of publication gravure is a structural problem that has affected web offset, the competing process in these segments, in the same way.

In contrast to publication gravure, packaging gravure has developed dynamically. This is particularly true in Asia, where gravure printing has a market share of up to 80% particularly in flexible packaging. In recent years, gravure printing has seen strong growth, especially in the Southeast Asian “tiger economies” such as Indonesia, Malaysia, the Philippines, Thailand and Vietnam, where almost 1,500 rotogravure printing machines are operated, twice as many as in Europe.

Since the retail structures in Asia, characterized by bazaars and small shops are changing towards supermarkets and hypermarkets, the need for modern film packaging for food and everyday products has increased and will continue to grow. This favours gravure printing, whose USP (“unique selling points”), such as excellent print quality with constant consistency in large print runs, meets this trend. Packaging printers in Asia have therefore invested heavily in modern gravure technology in recent years. A significant proportion of the record sales by the European press manufacturers has therefore gone to Asia.

In 2001, and again in 2006, ERA commissioned studies on the “Image of rotogravure printing among branded companies”. Both studies, which were carried out by Europe’s leading market research institute GfK, looked at the customers’ perception of gravure and flexographic printing. Favourable results were obtained for gravureprinting, as eight out of ten brand-name companies named gravure printing as the preferred printing method for their packaging. 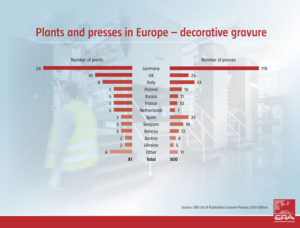 Again in 2013, GfK on behalf of ERA examined the requirements of branded companies for packaging printing. According to this, important criteria for branded companies when choosing the printing process are the print run length and print quality. If excellent images and high colour saturation are required, the print quality is the decisive criterion when choosing the printing method. As in the studies in 2001 and 2006, brand owners view gravure printing not only as the ideal process for high print runs, but also as the process that guarantees the highest print quality.

The 2013 study, however, also confirmed the tendency towards more frequent design changes and thus smaller quantities. In addition, special designs are increasingly in demand, e.g. for occasions such as soccer world championship or Olympic Games. However, this is suspended during the current Corona crisis. Since such events are currently not taking place, large print runs with standard designs are demanded instead of smaller runs with special designs, which has resulted in a real boom for gravure printing.

Nevertheless, it can be assumed that after Corona the trend towards frequent design changes and smaller print runs will revive, which above all favours flexible and fast processes. However, this should by no means be a disadvantage for the gravure printing industry as it has done its homework in recent years and has further optimized its efficiency both in prepress and machine set-up times. And the machine manufacturers have meanwhile also developed compact gravure printing machines, which are ideally suited for jobs with smaller batch sizes (e.g. the Dynastar from Windmöller & Hölscher or the NXS 300 from Uteco).

Gravure printing has a particularly strong position in decorative printing. The printed decorative paper required by the wood-based materials and furniture industries for the production of laminate flooring, furniture veneer and kitchen countertops is usually produced only in gravure. The booming demand in recent years, e.g. from the construction industry, has promoted the consumption of laminate flooring and kitchen countertops with a wide variety of decors. In these segments, the market has grown particularly in China, where the major European decorative printers now have their own production facilities.

The decorative printers are now also using digital printing in addition to gravure. However, this is only applied for small batch sizes and individual designs which are increasingly in demand, e.g. to individually furnish a hotel. But for the standard decors produced in large quantities gravure printing is still the common method.

The shut-down of public life and the imposition of curfews in practically all European countries during the height of the Corona crisis in spring 2020 have severely affected the economy and the industries. Of course, this also applies to the gravure printing industry: the machine manufacturers are still in a difficult situation because for example they can no longer send their technicians to customers around the world where their machines are operated. Investments in new machines have also been postponed. In this respect, the demand is picking up again very slowly.

On the other hand, the situation is better with the packaging gravure printers, who are busy printing the urgently needed packaging material for the large branded goods and food companies. This also applies to the cylinder manufacturers who produce and deliver the printing formes for the packaging printers. Since particularly large print runs are in demand, gravure printing has even experienced a renaissance and has proven to be a systemically relevant industrial sector.

The still ongoing authorisation process for chromium trioxide should soon be concluded by the EU, since a motion against the authorisation, submitted by the Environment Committee of the European Parliament, was rejected by the Parliament. Chromium trioxide is still indispensible in the manufacturing of the gravure cylinder: it is used to generate in a galvanic process the hard chrome layer, which guarantees stability and pressure consistency of the cylinder. Chromium trioxide is also used in numerous other industries such as the automotive and the aviation industries, primarily to ensure surface hardness and corrosion protection. In any case, it can be stated that gravure printing has a good environmental balance as solvents and cylinders are recycled and reused.

* ERA is the international technical organization of the gravure printing industry with worldwide membership from the fields of publication, packaging and decorative gravure as well as the supply industry. The task of the ERA is to promote the gravure printing process among users and print buyers. ERA was founded by the major European publishing houses in 1956. ERA is based in Munich. Online

James Siever is a lawyer with a wide professional experience in the printing industry. In his forty years of professional career he has worked for several national and international organisations of the printing and packaging industry, as well as with Tetra Pak, manufacturer of packaging systems for liquid cartons. Since 2000 he is Secretary General of the European Rotogravure Association which is the international technical organisation of the gravure industry. 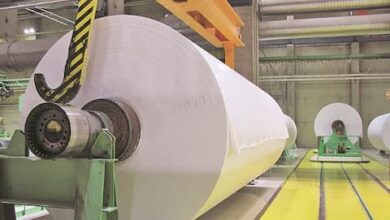 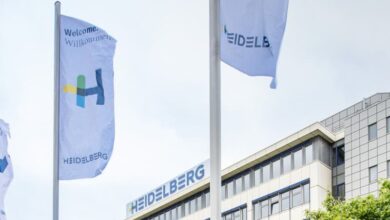 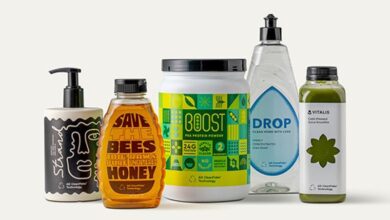 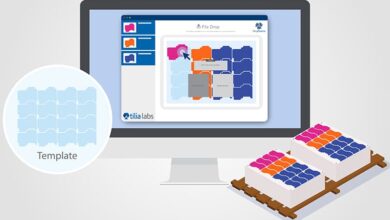