As part of the golden jubilee celebrations of the establishment of diplomatic relations between Japan and Bahrain, a travelling exhibition showcasing the beauty of modern Japanese art is being held at Manama’s Bahrain National Museum from 1 September, 2022, and will continue until 26 September, 2022.

Titled ‘Variation and Autonomy: The Prints of Contemporary Japanese Painters’, the exhibition is being organized by the Japanese Embassy in co-operation with the Japan Foundation and Bahrain Authority for Culture and Antiquities.

The opening was attended by Bahrain Culture Authority President Sheikh Khalifa bin Ahmed Al Khalifa, along with the Japanese Ambassador to Bahrain Miyamoto Masayuki, besides several high-ranking diplomats, a number of media professionals, and those interested in Bahrain’s cultural affairs.

Curated by Kyoji Takizawa of Tokyo’s Machida City Museum of Graphic Arts, the exhibition showcases the works of ten Japanese artists who explored a wide range of possibilities through prints and expanded expression in contemporary art using the print medium in the 1970s. Rather than focusing on specialists who are considered to have shaped the history of contemporary Japanese prints, the exhibition deals with prints by painters who drew on trends in contemporary art and attempts to reassess the existing history of contemporary Japanese art. 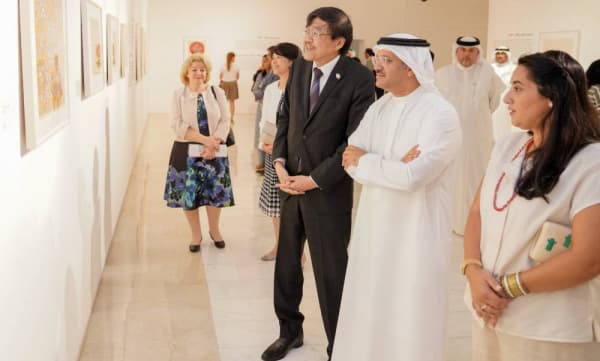 The foundation organizes exhibitions independently and in cooperation with other organizations. The foundation also supports exhibitions of Japanese art held abroad and facilitates the exchange of individuals with artists and art professionals. In this way, the Japan Foundation strives to present art as a means of intercultural exchange between Japan and other countries.

Parallel to these activities, the foundation continuously conducts travelling exhibitions overseas introducing traditional and contemporary Japanese art such as architecture and design, handicrafts, painting, and photography. Around 20 permanent travelling exhibitions are on the road throughout the year, appearing in over 100 art galleries, cultural centres, and museums.

The Future of Package Printing to 2027

Hotpack Expands by Launching its Latest Stores in Riyadh